I've been sewing for about 8 years - ever since my mom handed over my grandmother's sewing machine.  I didn't set out to be a fashion designer.  It was never a dream of mine.  Actually, I had just received my degree in the social science's.

The job search ended before it even began.  Sewing became a compulsion.  I started small, designing a plushie, moving on to more complicated constructions.  I took the plushies to the 1st Renegade Craft Fair in Chicago.  The Pure Detroit Design Lab opened soon after.  It was to carry local independent designer's designs.  By then, I had done my first fashion show on the steps of the esteemed Cranbrook Art Museum.  Just learning as I needed.

The lab was hot!  It brought together our little scattered tribe.  I had no idea Detroit had so many young designers.  I knew we were home to Anna Sui, Pelle Pelle's Marc Buchanan, John Varvatos (who hadn't come out with his own line yet) and a handful of lesser knowns, i.e the shortlived and beautiful Eventide.

It was at the PDDL that I met up with my old pal, Sarah. The rest is history.....
P.S. Sadly, the PDDL closed after 2 brief, happy years.  The parent store, Pure Detroit, is alive and well.  Happy 11th birthday Sean, Kevin and Aidan!

Below is Wound Menswear's Debut as featured Designer for the PDDL. 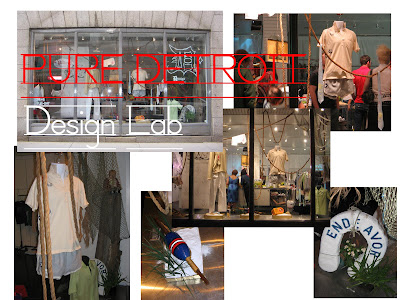 Posted by WOUND Menswear at 8:25 PM